Pig Island NYC is returning for the 11th year – with all the great food and beverage we always have, but with some important new safety guidelines. We’re excited to host Pig Island at a new and extremely spacious location – Snug Harbor NYC, an 84 acre cultural center that includes 14 botanical gardens and a heritage farm – plus plenty of parking. Get your tickets now.

We’ll be announcing more chefs soon and hope to see you there!

We are offering three ticket tiers. A VIP Pitmasters Breakfast will kick off at 11am. General admission doors open at 11:30am-4pm. Arrive before 2pm or food may run out.

VIP Pitmasters Breakfast: $150 to arrive early at 11am and enter before general admission for a preview of the best bits from some of Pig Island’s top pitmasters.

VIP Private Table and Tent: $2,500 for 8 seats and a private table and tent. Have an area just for your family and friends that is socially distant from the rest of the picnic and arrive early at 11am. Enjoy an assortment of drinks available in your tent and interact personally with one of the BBQ chefs to go behind the scenes and taste their best bites right off the smoker.

Get your tickets here.

In addition to having more space, we’re also going to limit the number of guests at the event. Once inside, there will be three separate areas to enjoy food and drink, allowing for greater social distancing. Hand sanitizing and hand washing stations will be accessible throughout the event. Guests will be required to wear masks when they are walking around and getting food, but can take off their masks when they sit down to eat with their group of friends and family members.

Food stations will be spaced out and if there are lines people will stay 6 feet apart. When you’ve gotten your food and are ready to eat – everyone can bring their own blankets to spread out and enjoy a beautiful day outside. Plus, wristbands will allow guests to wander Snug Harbor’s grounds and re-enter when they want to.

Guests should bring their own

Take the Staten Island Ferry and once you arrive, take the S40 bus at Gate D to travel along Richmond Terrace, less than a 10-minute ride. Let the bus driver know that you want to get off at Snug Harbor.

By Car from Brooklyn, Queens, and Long Island:

Take the lower level of Verrazano Narrows Bridge; stay on the right, and exit at Bay Street. Take the Bay Street exit service road to Bay Street. Make a left and follow Bay Street past the Staten Island Ferry Terminal, where Bay Street becomes Richmond Terrace. Follow Richmond Terrace about one mile to Tysen Street. Make a left on Tysen Street, and then the next right on Fillmore Street, and enter the parking lot immediately to the left of the gated entrance. Parking will be right after the gate on the left-hand side.

Brooklyn Battery Tunnel: To BQE West. Verrazano-Narrows Bridge to SI Expwy (I-278). Get off at Clove/Richmond Road exit (#13). At third intersection, bear right onto Clove Road. Continue to Bement Ave. (will see a cemetery), turn right onto Bement. Continue to Richmond Terrace. Make a right onto Richmond Terrace to Snug Harbor. Make a quick right at the Snug Harbor sign and then a quick left through the brick gatehouse.

By Car From New Jersey:

From the Goethals Bridge: Take 278 East or take the Outerbridge Crossing to 440 North, following signs to the Verrazano Bridge/278 East. Get off 278 East at the exit marked Richmond Road/Clove Road. (Do not take the Richmond Avenue exit). Take the service road to the first light, make a left, and follow Clove Road to Richmond Terrace. Make a right on Richmond Terrace and follow it until you come to Snug Harbor, which is on the right and marked by a black cast iron fence and magnificent pillared buildings at Snug Harbor Road. Turn right and you will see the entrance gate on your left-hand side. Follow the signs for parking.

From the Bayonne Bridge: Take the first exit (Richmond Terrace). Make a right at the top of the exit ramp onto Richmond Terrace. The Terrace snakes around a bit, following the shore of the Kill Van Kull river. Go about 3 – 4 miles, you will see Snug Harbor on the Right. It is just past the Getty gas station and a little restaurant on the left called Blue. 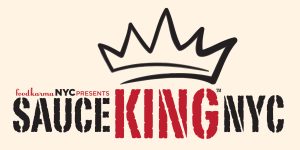 Sauce King NYC™ will determine the best barbecue sauces, hot sauces, marinades and more. A panel of expert judges from the NYC food, chef, and media community will taste each sauce, and select exclusive winners in each category who stand out for their bold flavors, excellent ingredients, and delicious taste.

Become the Sauce King when you enter your BBQ sauce, hot sauce, condiment, marinade and more at saucekingnyc.com and read more about the innovative virtual competition in NYC BBQ. 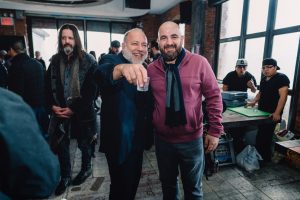 Get your gift certificate today.

Thank you for celebrating the 10th Annual Pig Island NYC! We could not have asked for a more beautiful day on the Red Hook waterfront. We believe it was our best Pig Island ever thanks to the delicious porcine dishes prepared by 20 chefs, flavorful craft beers, ciders, and spirits, live music, and of course, the energy and enthusiasm that all our guests bring to the event!

The Josh Ozersky Memorial Award – AKA Best in Show

Judge Adam Poch says: “This dish just hit every note – it was savory, sweet, spicy, the casing had a great ‘snap’ – it was the perfect bite to showcase the pig.”

The Whole Hog – AKA Best Use of the Whole Pig

Tank prepared a pure-bred Ossabaw Island Pig, which he calls “one of the oldest and tastiest pigs in the world,” accompanied by collard greens.

Judge Adam Poch says: “This pig is over 40% fat – and that’s where the flavor comes from – this pig was literally dripping with flavor.”

Slow Braised Ribs finished on the grill with homemade BBQ sauce, and topped with pickled jalepenos and cilantro

Pig Island is proud to partner with Friends of Firefighters, a non-profit providing counseling and wellness services to the FDNY and their families.

The Ingenious Pig – AKA Most Creative Dish

Roxanne Spruance, “The Butcher,” New York
Vietnamese Larb: A Southeast Asian salad that’s made with pork shoulder and veggies, then seasoned with cilantro, mint, and a ton of fish sauce

You Look Mahvelous – AKA Best Presentation

Bad to the Bone – AKA Best Rib

Rookie of the Year – AKA Best First Time Participant

Pig Impact Award – AKA Making a Difference Through Food

Judge Adam Poch Says: “They are donating some of their proceeds to Austism Speaks – bridging the gap between old school home recipes and helping the community.“

Jeff Lutonsky and Meghan Love, Mable’s Smokehouse, New York
Pulled Pork Bacon Cups: A little cup made out of bacon with a moist bite of pulled pork and a dollop of sauce.

From Food Karma
Check out chef interviews leading up to Pig Island with Tank Jackson of Holy City Hogs, Meghan Love of Mable’s Smokehouse, and Roxanne Spruance of The Butcher!

From Jimmy Carbone on CulEpi
Sustainable Alternatives to the Big, Bad Meat Biz: Some Facts You May Not Know. Read it here.

Next Up from the Creators of Pig Island: Pastrami on Rye on October 16

Sample the world of rye with rye whiskey, farm beers, breads, and kosher barbecue at Food Karma’s featured event of NY Rye Week! This all-inclusive event will dive into the intersection between rye used in whiskey, beer, and bread! What better way to showcase rye grains, bread, and whiskey in NYC than pastrami on rye?

How did it all start?

Pig Island was conceived after Jimmy Carbone and Josh Ozersky teamed up to produce Meatopia 2010. While Meatopia has since developed into an international food festival, Food Karma sought to embrace the burgeoning farm-to-table movement and support sustainable practices. This is how Pig IslandNYC was born.

In the 10 years since Pig Island was founded, Jimmy has worked to uphold the original vision for Pig Island, expanding the event’s reach, growing relationships with more farms and chefs, working with community partners like Friends of Firefighters, and creating the I Like Pig cookbook. For the 10th anniversary of Pig Island, we would like to honor Josh Ozersky, whose passion and creativity continue to inspire this event.

Jimmy Carbone, the producer of PigIsland, NYC teamed up with James Beard Award winning cookbook author Rachel Wharton to create a cookbook full of porcine goodness. Every year dozens of chefs come together and celebrate the agricultural bounty of the tri-state area  at Pig Island. I Like Pig serves up some of the most popular recipes from the first four years of PigIsland.

Thank you to all the Pig Island Sponsors for your support!

This error message is only visible to WordPress admins

Error: API requests are being delayed for this account. New posts will not be retrieved.

Make sure this account has posts available on instagram.com.

Pig Island’s Celebration of Pork Is Back in Red Hook on September 9 – NYC BBQ By Sean Ludwig, August 17, 2018

Pig Island To Test Your Capacity For Pork This September In Red Hook – Post by Gothamist on last years Pig Island event By Nell Case, Aug 1, 2017